Even though it had been over two decades since entering a softball field, I knew it would all come back to me. I mean, after all, I was a star player back when I was fifteen. Surely that dormant talent would reawaken and push me back to star player status. The line from Toby Keith’s song came to mind, “I ain’t as good as I once was, but I’m as good once as I ever was.”

The smell of clay and grass heightened my senses. Nostalgically, I picked up a softball and rolled it around in my hand, feeling the threads and remembering the countless hours spent with one of these precious objects in my fingertips. Softball was once my identity.

Our church league team warmed up. Impressed that my shoulders still worked, I accurately threw the ball to my partner and in turn caught her throws. Deep satisfaction rose up. And so did my pride.

My first at bat was a fly ball, but my second was a walk. If there was anything I used to be good at, it was running bases. Wiry and fast—neither of which described me now—I could beat any ball to the base.

One of our guys slammed a hit into the outfield and I took off to second base. The fielders fumbled with the ball, so I took the opportunity to head for third. Then, something happened to my body. My mind told me to keep running to third base, but my feet stepped in a patch of soft sand and lost traction. Like something out of Looney Toons, my feet flew out behind me as my face planted in the clay.

My brain believed; but my body revolted.

I did get up and made it to third base. The umpire was kind enough to call me safe. My team sent in a runner, and I made my way to the bench. Immediately, I went back to my mindset as a kid, Nothing hurt but my pride. Pride was the least of my problems. I fell two more times in the outfield that night, lobbing the ball toward the infield from a flat position.

The next two days after the ballgame humbled me more than faceplanting on the diamond. Knots, swelling, scrapes, bruises, a mild concussion, and whiplash were my reality this past week. I. Am. Not. Invincible. Softball didn’t “just come back to me,” and I definitely wasn’t as good as I once was.

But don’t our brains do that to us? Convince us of things that aren’t true? Our truth is not reality. I am not a softball star. I am a forty-year-old mom who has had two c-sections and was inactive for most of the last two decades. Only recently have I taken up pickleball, but that doesn’t make up for so many years of sedentary living. It makes me want to examine other thoughts I keep hidden in the recesses of my brain. Those secret areas are dangerous if we have never said them out loud. Our assumptions, decisions, realities, and truths aren’t always accurate and sometimes it takes faceplanting and pain to show us that we have been wrong in our thinking.

I want to challenge you this week to examine your thoughts. Say your assumptions and secret decisions out loud to someone else. And then, really listen. The last words of my husband that night as I walked out the door were, “Don’t get hurt.” I. Should. Have. Listened.

What truths do you need to consider? Lost Under the House 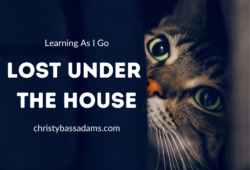 2 thoughts on “Faceplant: The Day My Brain Lied to Me”